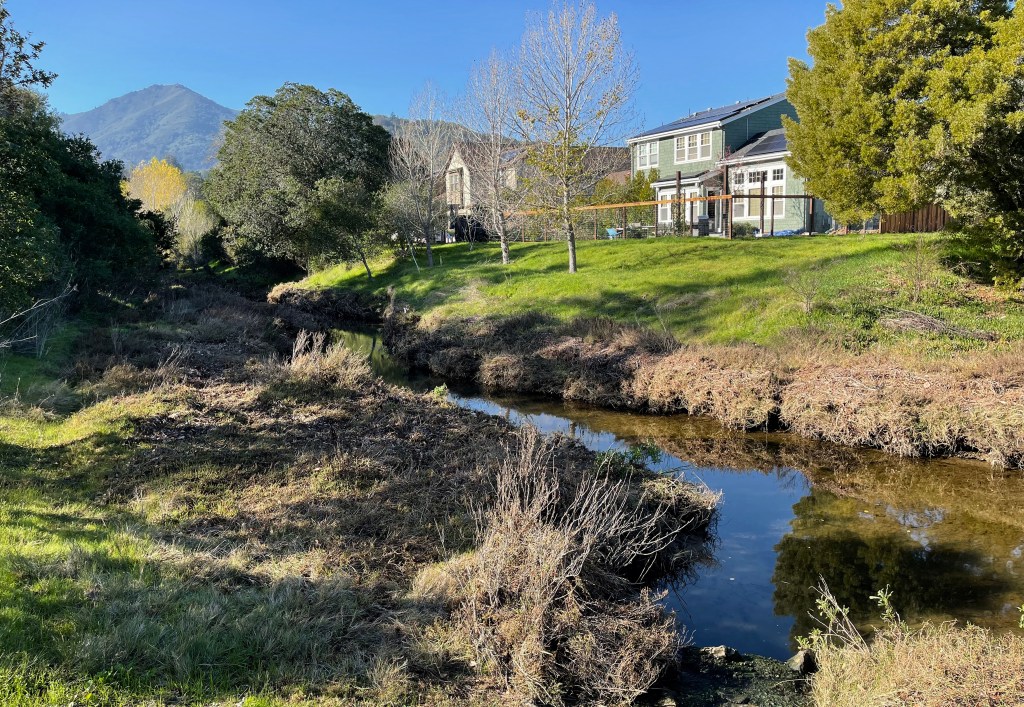 Homeowners of a creekside neighborhood in Larkspur may soon be relieved of an environmental constraint they say is preventing them from enjoying their backyards.

The restriction, a 50-yard creek setback, governs eight properties on Rose Lane. It was adopted to minimize storm runoff and erosion into the Larkspur stream, which runs behind the houses.

A city engineer’s report presented to city council on Wednesday concluded that reducing the setback so residents can add patios and other amenities – currently prohibited as considered “impervious surfaces” – would not cause drainage problems.

The council ordered staff to bypass the Planning Commission and come back with an order that would reduce the setback requirement to 25 feet.

“Thank you so much for all the work that has been done and for the patience,” Mayor Dan Hillmer told staff and a group of residents who petitioned the city for the amendment.

The homes are part of the Rose Garden project approved in 2010. The neighborhood is an 85-home development on the former Niven Nursery site off Doherty Drive.

A 25 foot creek habitat buffer extends between the creek and the Rose Lane backyard fences. The owners want to change the 50ft building setback rule which prohibits desired outdoor landscaping 25ft away, within their fenced yard. Residents do not propose any changes to the habitat area.

The request was considered by council in December. Council voted unanimously to ask the applicants to revise the proposal to address concerns about hydrological and water quality impacts on the creek. The revised proposal was to be considered by the Planning Commission.

Lorraine Weiss, a planning consultant working on the project, told council that Julian Skinner, city engineer and director of public works, had reassessed existing reports on the drainage system.

“Essentially, the city engineer concluded that the calculations for the drainage that was installed in the stormwater retention ponds were all designed to accommodate the potential landscaping in the rear yards of these lots,” said said Weiss.

She said the drainage system is designed to manage stormwater runoff that would be generated if all yards were paved.

With that in mind, Weiss recommended that staff not send the proposal to the Planning Commission and ask council to consider the amendment in a hearing at its next meeting.

City manager Dan Schwarz said council was comfortable with the plan because it didn’t require a vote.

“If we were to put something that was waterproof in there, studies say it wouldn’t impact drainage or water quality,” said Rose Lane Homeowners Association member Chris Wheaton. and representative of the requesting group. “We are happy to see the staff report.”

A film reveals life in Ukraine, then and now